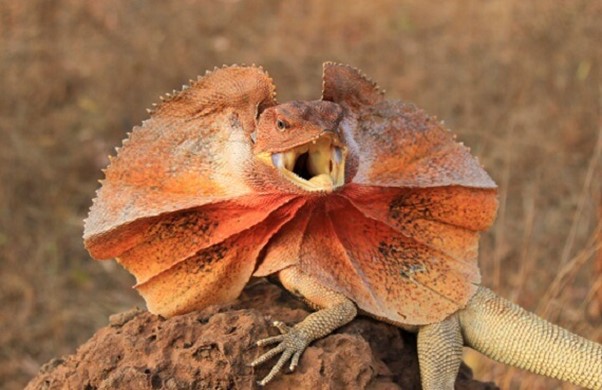 The frilled lizard (commonly known as the frill-necked lizard) grows to around 45-90cm in length, about two-thirds of which is tail. It has a vivid yellow mouth and a large extendible frill gathered about the neck and under throat. The combination of the gaping mouth and the wide, brightly coloured frill provide an intimidating sight to any potential predator. It frequently runs at speed on two legs to escape danger, quickly climbing the nearest tree to safety. Their colour can be brown or grey with the frill being lighter and often tinged with orange or reddish-brown. Males are bigger than females and have a more robust appearance. There are two long, pointed canine-like teeth present in the lower jaw, which can inflict a painful bite.

Frilled lizards inhabit dry woodland, usually with an open shrubby or grass understorey. Most of the time is spent off the ground in trees, often at a substantial height. They are well adapted to life in the hot tropics of north-western and northern Australia and the species also occurs in Papua New Guinea. The term ‘frilly lizard’ is often mistakenly applied to the common bearded dragon in the southern states of Australia.

The frilled lizard eats mainly insects, spiders and other invertebrates, although small mammals and reptiles are also taken occasionally.

·       Frilled dragons are not poisonous